From the Output Panel (table or tree), you can double-click on a gene set row to pop up a new window showing the details for the gene set. If you have done multiple analyses,click on the p-value for the specific gene set you wish to view. If you have not done any analysis, you will still see the window. After double-clicking, you will see a new window. 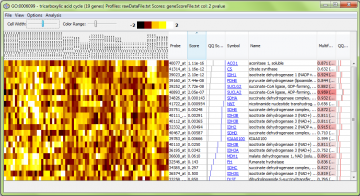 There are a few things to note:

The non-heatmap columns are as follows:

Currently the analysis menu has only one function, to show you information about the distribution of the scores for the genes in the group in the context of the rest of the genes. The window displayed has three tabs:

When you click on a gene symbol, your web browser will be opened to a web site of your choosing. The preset is the NCBI “Gene” database, but you can change this using the “Options -> Change gene name URL pattern…” menu item: 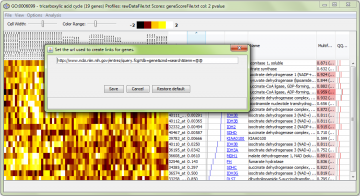 Using this requires that you know the URL (web address) for a gene. Just replace the term you would normally put in the URL with two “at” symbols (“@@”). They will be replaced with the Gene Symbol.

For details and some examples, see this page.

You can switch data sets (or define one if you have never loaded one) viewed in the heatmap by selecting the “Options->Change data set”.

Note: Naturally, if you switch to a data set that uses a different platform (e.g. microarray design), the results might not make much sense. Note that the gene scores displayed are always the ones you used for the last analysis (or the run you double-clicked on) to get this window).

Note: If you switch data sets, the setting is “sticky”: all new visualization windows you open will use this data set, until you switch back.

This is similar to the function for setting the raw data file.

Saving the data and/or image

Using the “File” menu, you can save the data shown, in text (data) or image formats: 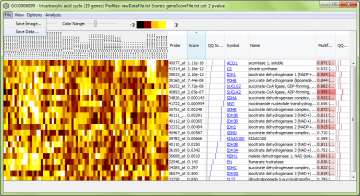 Here is an example of the resulting image, which is in PNG format:

You can also save the data using the “File” -> “Save Data…” menu option:

A sample resulting file for the data above is here. In this case we had the “Include annotations and scores” but not “Standardize” checked. This file can be loaded into Excel or a similar program for further analysis.